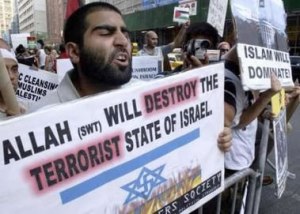 Syria has threatened to “send Israel back to the era of prehistoric man” if
the Jewish state attacks it with unconventional weapons.

A source close to decision-makers in Damascus was quoted by Kuwaiti
newspaper al-Rai on Saturday as saying that “If Israel uses unconventional
weapons, we’ll respond in a similar fashion.”

Earlier this week, an Israeli minister told the Sunday Times that Syria
would be “sent back to the Stone Age” if Hezbollah launches ballistic
missiles.

The Syrian official said Damascus has upgraded its military capabilities and
has prepared for a number of possible scenarios in case a war against Israel
breaks out.

“Despite the fact that Syria has been outside the cycle of war since 1973,
it did not sit idly by for even one day and is still working to develop its
capabilities via missiles,” he was quoted by the Kuwait paper as saying.

The official said Syria has drawn lessons from Hezbollah’s “success” during
the Second Lebanon War and has since then developed “advanced methods of
warfare.”

‘War could break out tomorrow’

The Syrian source said Damascus’ wartime strategy is based in part on the
possibility of opening a broad front against Israel – from Rosh Hanikra to
the Golan Heights. In addition, said the official, Syria is capable of
launching 60 ballistic missiles deep into Israeli territory if the Jewish
state will “dare to try and undermine Damascus’ sovereignty.”

“Syria can also launch 600 short-range tactical missiles into Israel in one
day,” he said, while detailing plans to attack Israel’s coastline if a war
breaks out. In this framework, he said, Syrian forces would employ
sea-to-surface missiles against Israeli civilian and military targets,
including ports.

The official did not address claims that Syria was transferring Scud
missiles to Hezbollah in Lebanon.

Hezbollah political bureau member Ghaleb Abu Zainab said during an interview
with NBN television on Friday that his group does not need Scud missiles to
defend Lebanon.

“The resistance possesses arms that can reach deep into Israel,” Abu Zainab
said, adding that Hezbollah is completely ready to confront the Jewish
state.

According to Abu Zainab, Washington and Jerusalem are using their
accusations of the Scud transfer to attempt to divert attention away from
Israel’s “violations” in the Palestinian territories.

Hezbollah Deputy Secretary General Sheikh Naim Qassem said Saturday, “We are
ruling out the possibility of an imminent (Israeli) attack, but the
resistance is operating under the assumption that a war could break out
tomorrow – so that we will not be caught by surprise in any way.”

Another senior Hezbollah figure, Lebanese Agriculture Minister Hussein
al-Hajj Hassan, said Saturday that allegations made by the US and the
“Zionist enemy” regarding the Scud missile transfers are aimed at “applying
pressure on Syria, Lebanon and the resistance.